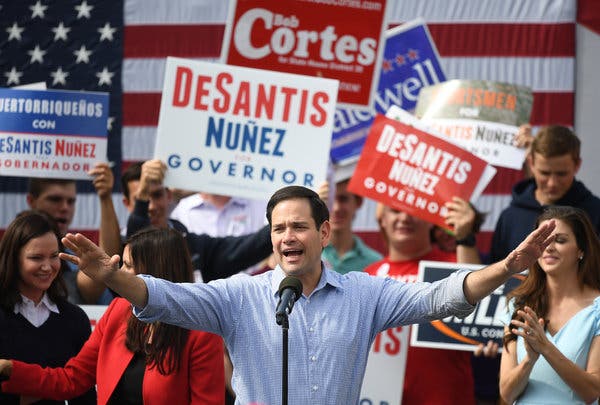 Senator Marco Rubio, Republican of Florida, campaigned for the state’s gubernatorial candidate Ron DeSantis this month. Rubio has accused Democrats of trying to “change the results” of the Florida elections.CreditCreditJeff J Mitchell/Getty Images

Modern autocrats don’t tend to announce themselves as autocrats. They claim to be democrats, and they portray their opponents as illegitimate. Once your opponents are illegitimate — because they’re traitors, cheaters or not true citizens of the nation — all kinds of extreme behavior can be justified in the name of democracy.

Viktor Orbán, the prime minister of Hungary, is a master of this autocratic approach, as I saw during my recent trip to Hungary. And we’re now witnessing President Trump and other top Republicans use the same tactics. No, the United States is not an autocracy. But what’s been happening this week is deeply worrisome.

Once again, Republicans are trying to thwart the basic functioning of government — in this case, a full counting of the votes in Florida and Georgia. They’re choosing power over democracy.

President Trump, Senator Marco Rubio, Governor Rick Scott of Florida and Georgia’s Brian Kemp have all falsely accused Democrats of trying to steal elections. “An honest vote count is no longer possible,” Trump tweeted yesterday. Kemp’s campaign accused his opponent, Stacey Abrams, of “making up numbers.” Scott told Fox News that Senator Bill Nelson, his Democratic opponent, is trying “to steal this election.” None of these claims are true.

And they’re damaging. “The new voting wars threaten to undermine the very foundation of American democracy: that election officials can fairly and accurately count ballots and that they can declare a winner whom the losers will accept as legitimate,” writes Richard Hasen in Slate. “When electoral procedures lose popular legitimacy, it is nearly impossible to get that legitimacy back,” argues Tom Pepinsky, a Cornell political scientist. “We’re in a dangerous place as a country,” says Brendan Nyhan of the University of Michigan.

There is nothing wrong with political candidates vigorously advocating their interests during a vote count or recount. The tabulation of ballots can involve judgment calls, especially in Florida, where some counties have a history of election problems, as Vox’s German Lopez notes. But there is no evidence of fraud in Florida or Georgia. Trump, Rubio, Scott and Kemp are just making that up.

I want to note that a full count of the vote in both of these states will still likely show that the Republicans won. In the Florida Senate and governor races, the margins appear too large to be overturned by a recount, writes Kirby Wilson of The Tampa Bay Times. Georgia is an even longer shot, as Rolling Stone’s Tessa Stuart suggests.

But top Republicans don’t seem to be willing to take their chances. They’d rather win unfairly than lose fairly — which is, again, the kind of decision that autocrats make.

This article originally appeared in